This Day Tour of Istanbul Bosphorus Cruise combines the best of both worlds, experiencing the Bosphorus up close and personal along with viewing Istanbul’s extraordinary skyline, and visiting a few of Istanbul’s historic sights. You will spend a few hours in Asia before crossing from Asia back to Europe in the blink of an eye over the Bosphorus Bridge
The Bosphorus, a waterway famed in the ancient world, provides the backdrop to all that makes Istanbul – exotic (the song of the Muezzin, crowded bazaars),  Eastern (domes and minarets) and yet Western (cafes and the Tram), ferry traffic, oil tankers and container ships, an extraordinary skyline. In addition to visiting the Spice Bazaar, the Rustem Pasa Mosque and touring Dolmabahce Palace, you will have lunch on the Asia side of Istanbul, view Istanbul’s famous landmarks from the Bosphorus, drive through several of Istanbul’s neighborhoods and drive across the Bosphorus Bridge.

This tour combines a three-hour cruise on the Bosphorus, with several land-based landmarks and lunch on the Asian side with a panoramic view of Istanbul.

The tour starts at the Spice Bazaar (Egyptian Bazaar). The Spice Bazaar, built between 1597 and 1664, is the second oldest covered bazaar in the city. Next stop is Rustem Pasha Mosque, built by Mimar Sinan in 1560 for Rustem Pasha, his son-in-law and the grand vizier of Suleiman the Magnificent. Its particular beauty lies in the Iznik tiles covering it, both inside and outside.

You will then board a boat for a Bosphorus Cruise. The Bosphorus strait connects the sea of Marmara to the Black Sea and separates Europe and Asia. The cruise will pass Dolmabahce Palace, Beylerbeyi Palace, Ciragan Palace and the Rumeli Fortress. You will embark at Uskadar, on the Asian side, to board a mini bus for a drive along the Asian side of the Bosphorus to Camlica Hill, where you will have lunch. Camlica Hill is the highest point in Istanbul with a panoramic view of Istanbul and the Bosphorus. After lunch, you will drive over the Bosphorus Bridge to the European side, stepping from from one continent (Europe) to another (Asia) in two minutes. The Bosphorus Bridge is 1704m long and was the 4th longest in the world when it was completed in 1973.

You will drive through Ortakoy, a cosmopolitan village on the Bosphorus, en route to your final stop for the day, a tour of Dolmabahce Palace, the first European style palace built by the Ottoman Sultans between 1843 and 1846. It was also the last residence of the Ottoman Sultans. It has 365 rooms and 22 salons. Kemal Atatürk (1881-1938), founder of the Turkish Republic, was living in Dolmabache Palace when he died. 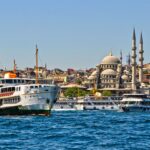 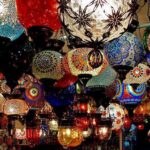